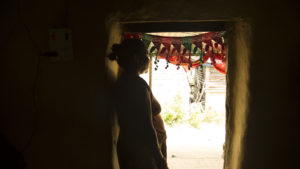 Knowing the devastating impact of sexual violence in conflict (SVIC) and the complex nature of this issue, in 2012 the UK government established the Preventing Sexual Violence in Conflict Initiative (PSVI) to respond to the needs of survivors and galvanise support for an international campaign. The creation of the initiative was followed by the 2014 Global Summit on Sexual Violence in Conflict (Global Summit), which gathered a broad range of representatives from government, international organisations and experts from civil society. As a cross-departmental initiative, the PSVI is led by the Foreign Office (FCO), with contributions from the Department for International Development (DFID), the Ministry of Defence (MOD) and the Home Office.

The UK government addresses the issue of sexual exploitation and abuse (SEA) perpetrated by peacekeeping forces and civilian staff working in conflict zones through a different set of teams and policies. This is done mainly through advocacy and programming led by the Gender Equality Unit at the FCO and through support for UN efforts to root out abuses during UN peacekeeping operations. The UK government also supports staff working on SEA at the UN Secretariat, such as the Special Coordinator on Improving the UN Response to Sexual Exploitation Abuse and the Victims’ Rights Advocate.

The Preventing Sexual Violence in Conflict Initiative (PSVI) was founded in 2012 by Lord William Hague and UNHCR Special Envoy Angelina Jolie. Total expenditure in 2012-13 reached £1.3 million, the majority of which was allocated towards supporting the International Criminal Court’s Trust Fund for Victims and a UN Team of Experts – £500,000 each. During 2013-14, PSVI expenditure increased to £5 million. It included continued support for the Trust Fund for Victims and UN team of experts, but was also used to fund programmes within the African Union and various country-specific prevention programmes, some of which engaged faith leaders, and survivor support programming, including judicial capacity building. Between the 2014 Global Summit on Sexual Violence in Conflict and the end of 2018-19, the London PSVI team spent just over £34 million, with a peak in 2014-15. During 2018-19, the PSVI London team spent less than £2 million, the majority of which went to the UN.

The UK government’s portfolio addressing SVIC and SEA ranges from judicial and accountability work to prevention and advocacy initiatives. These activities sit within the policy context of eight UN Security Council resolutions (UNSCRs) on women, peace and security. The 2018-22 UK National Action Plan on Women, Peace and Security represents the government’s highest-level strategy on gender and conflict. Strategic outcome 3 (SO3) and strategic outcome 5 (SO5) are particularly central to this review. SO3 commits to an increase in interventions to prevent and respond to gender-based violence, while SO5 aims to ensure that the security and justice sectors are increasingly accountable to women and girls. Six of the nine priority countries set out in the National Action Plan can be found among the top ten locations for UK spending on PSVI activities.

The purpose of this joint review is twofold. First, we will explore how well the UK government has delivered on the promise of the PSVI initiative and what progress has been made towards its commitments to reduce stigma for survivors, increase justice and accountability, and increase preventative efforts since the 2014 Global Summit.

Second, this review also offers the opportunity to assess in parallel the ways in which the UK government has been active in addressing the challenge of violations committed by international peacekeepers, police and civilian staff.

This joint review will therefore limit its focus on sexual violence to particular sets of circumstances and characteristics. These are:

The final output of this joint review will be two related reports, the first focusing on SVIC perpetrated by military forces and combatants, and the second centred on SEA by UN and other international peacekeepers, police, and civilian staff of the aforementioned organisations. 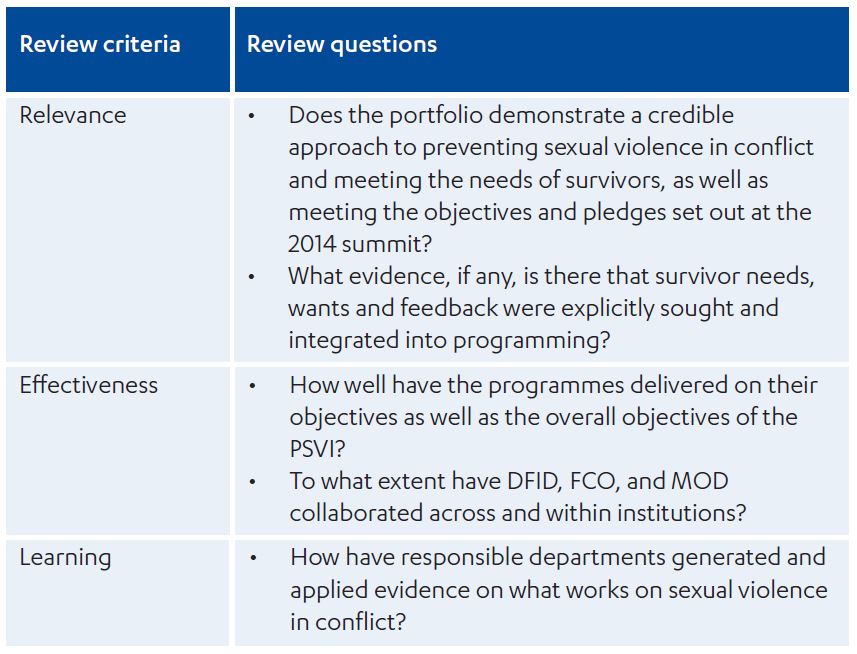 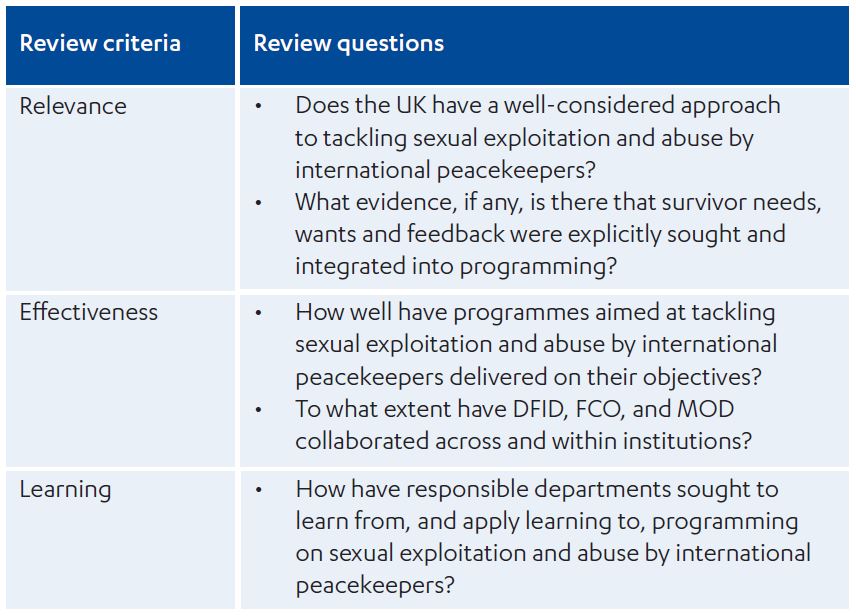