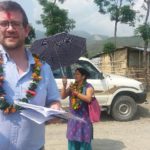 Matt Wilkins writes about his experiences of the field trip to Nepal as part of the ICAI Anti-Corruption Study.

In May 2014 I joined ICAI’s anti-corruption study team on an evidence-gathering trip to Nepal. In this breathtakingly beautiful country I gained an appreciation of how corruption can not only impact upon the lives of the poor, but also on a whole country’s chances of emerging from poverty.

There can’t be many cities as dramatic to arrive in from the air as Kathmandu. Flying in from India, I was treated to a view alongside the plane of Everest itself, glistening alone in the sunshine. This introduction to the country gave me a sense of spending time in the pages of the National Geographic that never quite left me while I was in Nepal.

In Kathmandu – a city of dust, temples, and traffic swerving around sleeping dogs – we spent the first part our visit meeting with DFID, the Nepalese government, and various local NGOs implementing DFID-funded programmes. Our decision to visit Nepal for this review could barely have been more timely or relevant. Nepal’s new prime minister had recently identified tackling corruption at all levels of society as one of his key priorities. Just the week before our visit, the country’s Commission for the Investigation of Abuse of Authority had arrested five senior officials in the Ministry of Health on charges related to pharmaceutical procurement corruption – a development which seemed to have sent ripples across government and the media.

We also learnt in Kathmandu of the scale of the challenge faced by those determined to properly tackle corruption and its underlying causes here: Transparency International ranked Nepal 116th in its corruption perceptions index in 2013, and regards the country’s businesses as the 6th-most corrupt in the entire world.

Nepal is also extremely politically fragile. Between 1996 and 2006 a civil war raged between government forces and Maoist guerrillas, killing 15,000 people. Even in 2014 the country is still taking only tentative steps towards a permanent peaceable political settlement. Elections to the national constituent assembly, for example, were scheduled to occur in November 2012 and did not take place until a year later, in November 2013, and there have been no elections at all to local councils since 1997.

On the third day of our visit, we flew south from Kathmandu to Biratnagar, an industrial city on the Indian border in the middle of an extreme heatwave with temperatures well into the 40s. From Biratnagar we drove on to the districts of Sunsari, on the Terai plains, and later to Dhankhuta, in the “hills” leading back to the Himalayas (a Nepalese definition: in the UK we would be very happy indeed to describe these as very large mountains!). In town hall-style focus group meetings, which were typically incredibly colourful and lively, we spoke to ordinary Nepalese citizens about their experiences of corruption, and of programmes funded by DFID containing elements designed to help such communities themselves ward off corruption.

The DFID-funded programme with the greatest recognition in the parts of Nepal we visited was the Community Support Programme (CSP). Under this programme, people in rural areas are able to apply directly for funding for projects they have identified they need. One of the key aims of CSP is to encourage transparency among these communities, to ensure that money is used legally. We saw numerous examples of CSP-mandated “public auditing,” with giant boards outside CSP-funded medical facilities, schoolhouses and waterworks informing the local population of how the money used for these infrastructure projects had been spent.

These visits to local communities could at times be, frankly, quite humbling. On several occasions the team and I were covered in intricately homemade garlands of flowers and thanked for the generosity and assistance of the British people. Indeed, the British brand in Nepal appears strong: a case in point being that even today many young men will put themselves through incredible exertions as they attempt to join the Gurkhas.

The issue of petty corruption, touching upon all aspects of people’s daily interactions with government, was rarely far from the surface in the meetings we held. We heard again and again of Nepalese citizens being asked for payments when needing documents to be processed, or when requesting essential paperwork from village offices. One man told us it was common to be asked for 30 rupees for “a cup of tea” by an official processing a form. Another told us that his daughter had been asked for 4,000 rupees to process a marriage certificate to enable her to move overseas (this is more than most Nepalese spend in a month).

And, despite corruption recently being raised up the political agenda, we found that there is a strong culture of impunity in Nepal. When we asked representatives of one district council whether they knew of people guilty of corruption going to prison, they laughed openly at the seeming ridiculousness of what we were suggesting.

Many Nepalese citizens we met with also felt that corruption in their country is so pervasive that it has affected the country’s potential to emerge from poverty. An elderly man in one focus group shared with us his view that “if we didn’t have corruption in our country, we may have developed differently and our lives would have been different.” In another discussion, another elderly man informed us that “corruption is why we are poor.” This sense of corruption acting as a brake on progress was amplified by the several cases we heard of infrastructure projects – vital in a country where a fifth of the population live eight hours or more from a road, and abundant potential sources of hydropower largely go untapped – being deliberately slowed down by public officials as a tactic to secure payments from citizens on the pretext that these could help hurry them up.

With my time up in Nepal, I began my journey back to the capital as an early taste of the monsoon struck. Buffeted by torrential rain and in fog so thick as to turn the day to night, our journey down a narrow road clinging to the mountainside served as a stark example of just how precarious life can be in this country.

My short trip had been an eye-opener into the pervasiveness and impact of corruption on the people of Nepal. The rest of the study team stayed on longer and visited other parts of the country, adding this evidence to that on how DFID works with developing countries to tackle corruption gained on an earlier trip to Nigeria. The task for ICAI is now to use all of this information to form a judgement on whether DFID is doing as much as it can– using its “brand” and its programmes – to help countries like Nepal emerge from corruption.

Matt is the ICAI Programme Manager. The Anti-Corruption review will be out in the Autumn.